Sustainability has always been a part of our core beliefs.

Holiday break: Master the smooth restart of your machine with a proper shutdown
SOLUTIONS

Residue inevitably builds up after color and material changes. This often leads to frustrating production challenges for operators who use traditional methods to clean their thermoplastic processing equipment. These issues affect a variety of applications such as injection molding, extrusion, blown film, and extrusion blow molding. Presented as streaks, spots, and discoloration on finished parts, these problems contribute to an unstable process. This may result in higher scrap rates, more downtime, and lower quality of finished products. All things to avoid.

Cost efficiency is an important consideration for your process. The use of a high-quality purging compound reduces the amount of time and material required to clean a machine from color and polymer contamination or material degradation. This contributes to a more stable production process and long-term financial gains.

Advanced purging compounds create a smooth transition between incompatible polymers and polymers with a wide processing temperature difference. They can also solve contamination issues when used to transition to clear or transparent polymers and when changing colors. This is necessary for hot runner molds and injection molding applications.

A free sample may be available. 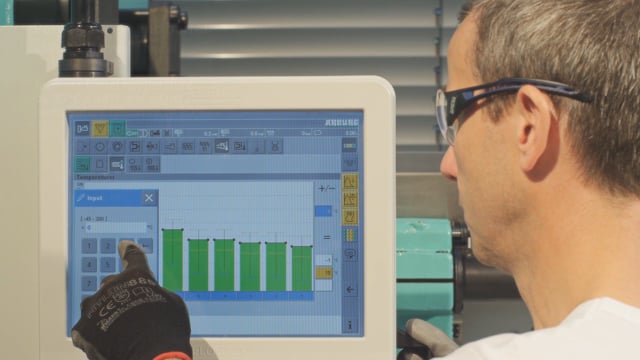 How to Purge the Injection Molding Machine Screw and Barrel

Learn how to improve purge results by varying low and high backpressure.

How to Purge the Injection Molding Machine Through Parts Production

Learn more about the technique needed for preparing and filling purging compounds in your operation. 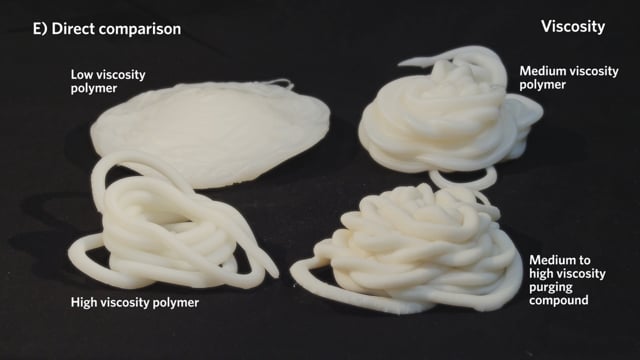 Watch and learn how to identify the polymer viscosity to ensure that you’ve selected the best purging compound match for optimal performance. 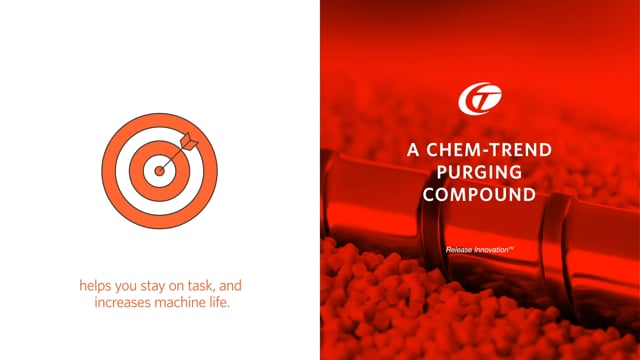 A Chem-Trend purging compound can purge all of your biggest frustrations and keep you moving forward. When compared to traditional cleaning methods, our purging products provide better cleaning, prevent unwanted stoppages, and save you money. Best of all, implementing a Chem-Trend purging compound is simple and can be done without any significant changes in your process. Request a free sample today, and swap unnecessary hassle for unlimited potential.

Learn more about purging compounds for thermoplastics applications and get answers to frequently asked questions.

Lusin® has been a leader in the thermoplastics industry for more than 60 years. Learn more about how to optimize your thermoplastic processing with Lusin® purging compound products.

Ultra Purge™ provides a broad spectrum of solutions across the Thermoplastics Industry. From Automotive and Medical, to PET requirements, blow molding and extruding technologies, we have a solution that meets your production needs.

Download our thermoplastic processing product brochure to find out which of our Lusin®Brand release agents will work for your application.

A solution that liquefies polycarbonates and doesn’t allow them to solidify during the temperature change
process. This is primarily used for automotive headlamps and rear lamps. It’s one product that allows for a
smooth transition between PC and PMMA.

Are specialized purging compounds important to use?

The use of a specialized purging compound can be tremendously helpful in reducing the amount of time and material required to clean a machine from color and polymer contamination or material degradation. They are the best solution for transitioning between incompatible polymers and polymers with a wide processing temperature difference. They can also solve contamination issues when the polymer is transparent, and when changing colors — especially when hot runner molds are used in injection molding facilities. The use of specialized purging compounds results in saved time and money.

What are the different types of purging compounds available in the market?

What positive effects on production do purging compounds provide?

Do universal purging compounds work with all applications and polymers?

What are the respective advantages and disadvantages of the different types of purging compounds?

Abrasive purging compounds provide fast and reasonably effective cleaning, but they can also damage screws and cylinders/barrels. It is dangerous to use them in hot runner systems, through screen packs or melt pumps. Abrasive purging compounds are more difficult to evacuate from the machine, creating greater potential for longer-term damage as well as for production-run contamination and scrap creation. Chemical purging compounds are safer for the equipment and may also be processed through screen packs and melt pumps. They are universally usable in hot runner systems and can be injected in cavities when a purge compound with an appropriately suitable MFI is selected. Because they are safer for the equipment, they are also more suitable for using as part of a preventative maintenance program as opposed to only as a “problem-solving product.” More recently, hybrid purging compounds, combining the efficiency of a mechanical cleaning with the thoroughness of chemical cleaning, have been developed. Purging concentrates allow for easier storage, but hold the potential risk of incorrect dosage and feeding issues.

Are there differences between purge compounds for extrusion and injection molding operations?

Can machine parameters influence the cleaning result of a purge compound?

Yes. Various factors such as temperature and application time have an influence on the cleaning result. These factors need to be taken into consideration when selecting and utilizing a purging compound. Purge compounds specially designed for the temperature range they are intended to be used in will provide the best results.

Not all purging compounds are safe for use in hot runner systems, screen packs, melt pumps and extrusion dies. However, there are some purging compounds that have been developed for such applications. A “mechanical” type purge compound can damage hot runner systems and other components. If you wish to also purge the hot runner, screen pack melt pump or extrusion die you should only use chemical reaction based purge compounds.

How do you remove material prone to thermal cracking and encrustation from equipment?

Some polymers tend to produce more thermal cracking, cross-linked residues and encrustations than others. These materials can be particularly hard to clean from a machine. Specialized purging compounds have been developed specifically for these polymers.

Can purge compounds be reground and reused for future purging?

There is no direct answer to this question because it depends on a wide variety of issues. Some of the factors that feed into this are things such as; the contamination of the machine, the reason for purging, the kind of purging compound that is used, the end product being molded and end customer requirements/ specifications.

Are purging compounds easy to use and easy to evacuate from transparent polymers?

Dedicated purging compound grades are especially developed for the cleaning of colors, removal of carbon residues and shut down of machines processing transparent polymers such as PS, SAN, PMMA, PET, and PC. Their formulations show good cleaning effect and quick evacuation when the purge process is completed.

What is the most efficient way to use purging compounds?

The most efficient way is to use purging compounds in a preventative maintenance program. Purging the machine on a regular basis or at least at every shutdown provide the best long-term results. By doing so, severe buildup on the screw, barrel, hot runners and extrusion dies can be avoided, resulting in less production stoppages, machine downtime, and material waste.

How often do I need to use purging compounds?

Cycles of purge depend on the complexity of material, number of colors processed, additives and processing parameters. Beyond using a purge compound when transitioning from one color or material to another, using a specialized purge compound could also be beneficial in the case of unexpected production events. One common example is when an operator has missed setting the proper processing temperature of a heatsensitive polymer for too long of a time.

Preventative maintenance of screws, barrels, and hot runner systems, through regularly scheduled and consistent purging, makes sure that they stay in clean condition, reducing carbon buildup. A general rule of thumb is one purge per week. If shutdowns are performed, purge should be used during every shutdown.

Is the use of virgin material a cheaper alternative than a purge compound?

With respect to sustainability, purging with virgin material is the worst approach. Compared with purging compounds, the cleaning performance of virgin polymers is poor, and the amount of scrapped material, time, and energy consumption is significantly higher. Using specialized purging compounds saves considerable time and energy between the last quality part produced in previous resin or color and the first quality part following. Using a specialized purging compound on machines typically purged with virgin polymer often evacuates several previously processed colors. This is due to the limited cleaning performance of virgin polymers.

Is it normal that scrap parts will increase immediately after the first test of a highly effective specialized purge compound?

Are purging compounds available for use when transitioning between materials with very different processing temperatures?

Some specialized purging compounds have been developed to cover a wide window of processing temperatures. In cases of extreme temperature difference a tailored solution may be required and you should check with the technical experts of the purge compound supplier to see what solution might be offered.

Polymer contamination/carbonization, additives, encrustations, degraded material, or color residue from “dirty” equipment can be released by utilizing one of our highly specialized Ultra Purge™ purging compounds. However, it is important to keep in mind that the more contamination, or dirt, there is in the machine the longer it will take to evacuate. In many instances the contamination or dirt has built up over an extended period of production runs. Therefore, it will take some time to clear out all of the contamination that has settled into the machine.

Why are Ultra Purge™ purge compounds considered the best choice when looking at a cost/benefit ratio?

Ultra Purge™ specialized purge compounds improve operational efficiency by reducing setup/change-over times and reducing both the time to purge as well as the amount of material required to complete a purge. These contribute to an overall saving of money and resources. Chem-Trend’s Ultra Purge™ purge compounds have been formulated to provide high performance with a lower the cost of cleaning.

Is there an Ultra Purge™ solution to overcome very different processing temperatures during material changes?

Ultra Purge™ grades are developed to cover a wide window of processing temperatures. In cases of extreme temperature difference, we may propose to use a combined system for cleaning. Chem-Trend has also developed a special formulation to allow for quick polymer change from high temperature PC to PMMA even if it is transparent.

You are about to exit this page. You will be redirected to the Chem‑Trend Global website where you’ll find your requested content in English.

We’re here to help. Just fill out this form to get started.